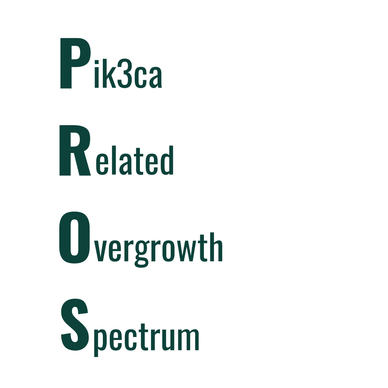 PROS at a glance..

A syndrome family for malformation and overgrowth conditions caused by activating mutations in the same gene, PIK3CA.

Varying from an isolated skin lesion to severe overgrowth of the extremities or brain. The mutation happens at random during early development, not every cell is affected and there are no known cases of inheritance. Only rarely is the mutation found in blood so testing should be done on affected tissue. There is sadly no cure for PROS conditions, but advances made in precision medicine is creating hope for treatments. 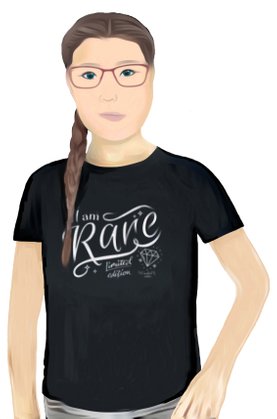 The diagnostic umbrella term PROS for the wide range of overgrowth conditions caused by activating mutations in PIK3CA was designated by a workshop group at the National Institutes of Health (NIH) in 2013 with the article coming out in 2015. 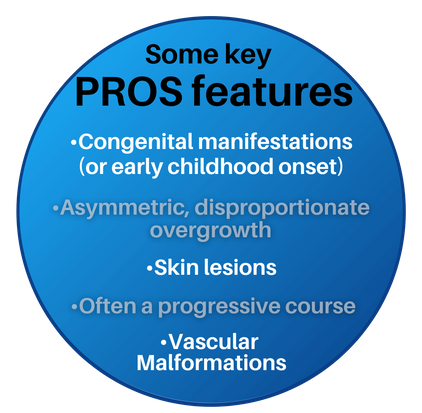 Other variants of umbrella terms used for the same syndrome family

PIK3CA is a protein coding gene located on the long arm of chromosome 3. It is a major regulator of several important cellular functions such as cell growth. The mutation of this gene in PROS conditions spontaneously occurs during embryonic development and the cause of the mutation is unknown. There are no known cases of inheritance. 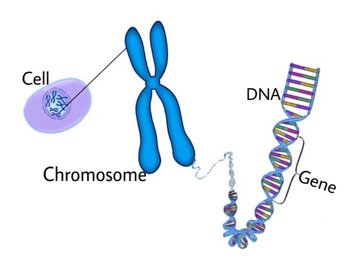 The gene PIK3CA and the mutation in PROS

Other names used for PIK3CA include:

The most common mutation in PROS is called a missense mutation, which is basicly a copying error. One of the four DNA nitrogenous bases (A, T, C, G) is changed in one cell. This change causes a different amino acid to be inserted into the protein and in PROS conditions this creates an overactivity, a "gain of function".

The affected tissues can include all or some of the types of tissue found in the body. Due to this very wide spectrum of disorders, ranging from an isolated skin lesion to severe overgrowth of the extremities or brain with refractory epilepsy, some may have phenotypical features that clearly falls into one of the entities on the spectrum (entities that were named before the genetic cause was known), for others a clinical delineation can be difficult as features often can be overlapping. Some are now receiving a diagnosis of PROS instead of a single entity on the spectrum. PROS is then sometimes referred to as PIK3CA Related Overgrowth Syndrome. There are both upsides and downsides with receiving only this broader diagnosis.

Most of these conditions were defiened as single diagnostic entities before the genetic cause was known. Many patients may experience overlaps of features from the conditions on the spectrum. Following is a brief description of the currently identifyed conditions associated with the PIK3CA-Related Overgrowth Spectrum.

Key features are capillary malformation of the lower lip, lymphatic malformation mainly on the face and neck, asymmetry, and partial/generalized overgrowth

CLOVES is an acronym for Congenital Lipomatous Overgrowth, Vascular malformation, Epidermal nevi, Skeletal/Spinal/scoliosis. Some of the most consistent features are Fatty Truncal Mass, vascular anomalies, skin lesions and abnormal extremities.

Fibro-Adipose Vascular Anomaly is characterized by tough, fibrous, fatty tissue infiltrating a muscle in one or more limbs. FAVA can also cause venous and/or lymphatic abnormalities.

Characterized by progressive patchy fatty, fibrous and/or blood vessel overgrowth of a limb or part of the body.

Facial Infiltrating Lipomatosis - A craniofacial overgrowth condition affecting one half of the face/skull. It affects both soft and hard tissues (facial skeleton including teeth).

A neurological condition where one-half of the brain is abnormally larger than the other. The structure of the brain on the affected side may be markedly abnormal or show only subtle changes.

Isolated Lymphatic Malformation is characterized by fluid filled masses that often occur in the head and neck region.

Key features are capillary, lymphatic and venous malformations as well as bone and soft-tissue hypertrophy.

Isolated overgrowth and malformation of a digit, whether of the hand or foot.

Abnormal overgrowth of cells in the skin.

PIK3CA is an oncogene, which is a gene that has the potential to transform a cell into a tumour cell, and PIK3CA plays an important role in tumor progression. There is a published article where 4 out of 122 patients diagnosed with CLOVES syndrome developed Wilms Tumor (also known as nephroblastoma, a rare kidney cancer, all developed by the age of 2). There is a need for further risk assessment for the other diagnosis on the spectrum, but on the basis of this article quarterly abdominal scans up till the age of 8 (when the risk reduces) has been recommended

Management will vary greatly depending on what's affected, but there is currently no cure for PROS conditions and treatment options are few. For surgical interventions there can often be seen recurrence of the overgrowth.

The advances made in targeted therapy is creating hope.

remarkable results in a (non clinical) study. “During 6 months of treatment, all patients

showed substantial clinical improvement”. One of the authors of the article, Dr.Canaud,

The current drug treatment options are targeted therapeutic drugs in the

and multi-target inhibitors for this pathway currently in development for

the treatment of several different forms of cancer.

Below is a description of the drug options currently available upon eligibility. 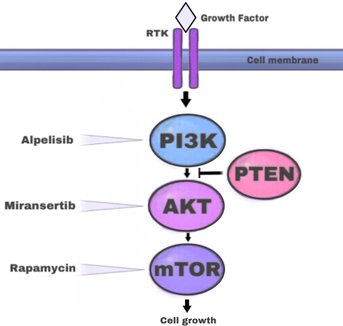 You would usually not find the mutation in a blood sample and due to the mosaic nature genetic testing must be preformed correctly. The mutation can be confirmed by doing a Next Generation DNA sequencing (NGS), as standard sequencing is ineffective at detecting changes that only affects a small percentage of cells. Testing should be done on affected tissue taken by puncture biopsy (or collected from surgery). For patients with face/head involvement a non-invasive buccal swab, also called a cheek-swab have shown a high diagnostic sensitivity similar to detection rate in tissue biopsi. Other testing options for patients with face/head involvement are testing on shed teeth or gingival (gum) biopsy. The latter option can be done as a "brush biopsy" which is non-invasive. Since the mutation is mosaic a negative result does not necessarily rule out a clinical diagnosis on the PIK3CA Related Overgrowth Spectrum.

With pharmacological intervention meaning targeted therapy, also called precision medicine, and present and upcoming clinical trials where you’ll need a documented mutation in order to be considered for treatment.

On april 6th 2022 FDA approved Novartis Vijoice® (alpelisib) as first and only treatment for select patients with PIK3CA-Related Overgrowth Spectrum (PROS) conditons. An approved treatment to specifically address the root cause of PROS conditions in select patients 2 years of age and older. Currently only FDA approved.

Alpelisib was FDA approved under the brand name Piqray the summer of 2019 for the treatment of HR+/HER2- advanced breast cancer (in combination with a fulvestrant). Approved by the EC and Health Canada summer 2020.

A (non clinical) study was published in the science journal Nature in June 2018 about a cohort of 19 PROS patients who all demonstrated clinical improvements and minimal side effects by this treatment (long term side effects still unknown). This drug is for some available through compassionate use program/managed access program, for those who are eligable. A clinical trial , named EPIK-P2, for PROS patients started recruitment April 19th 2021. A retrospective study of PROS patients who have received

Alpelisib as part of a compassionate use program started June 9th with completion date April 16th 2021.

Applied directly to the lesion and thus bypassing the need for systemic administration.

This drug is currently in clinical trial for the treatment of both PROS and Proteus Syndrome (another overgrowth condition caused by AKT1 mutation). Interim data from phase 1/2 of this trial showed a manageable safety profile and the majority of patients demonstrated no disease progression. This trial is still open for recruitment. An article published in February 2021 on the use of this drug in two children (one with FIL) can be found here. Both patients discontinued the use of

Sirolimus is a drug indicated for posttransplant immunosuppression, but there has been off-label(*) use of this drug for patients with overgrowth diseases for several years. The conclusion from a recent study of Rapamycin in PROS patients: “This study suggests that low-dose sirolimus can modestly reduce overgrowth, but cautions that the side-effect profile is significant, mandating individualized risk–benefit evaluations for sirolimus treatment in PROS.”

A related drug to Sirolimus, also an mTOR inhibitor, is Everolimus, marketed under different brand names for different indications but they have the same active ingredient. Everolimus is also being used off-label for patients with overgrowth conditions.

*Off-label means the use of a drug for a condition other than for that which it has been officially approved for.

2017 - Mosaic Disorders and the Taxonomy of Human Disease

UnderstandingPROS - Novartis has created a website for PROS patients

Brochure about FIL and PROS for kids

This website is intended to connect families and people with Facial Infiltrating Lipomatosis (FIL), share experiences, provide information and support.

It is not intended for medical diagnostic use or to replace medical consultation. No images on this website may be used or reproduced.